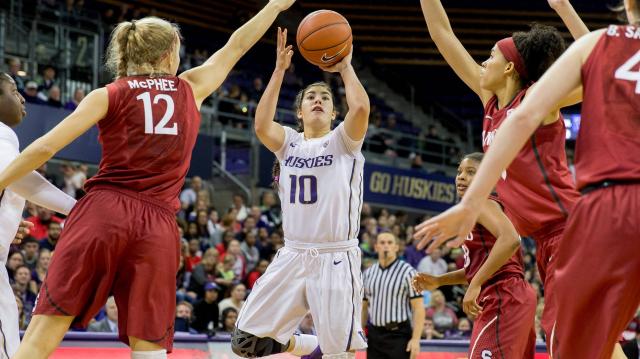 An undeniable trend has developed when native Arkansans head to the state of Washington for basketball.

As I detail in an upcoming OnlyInArk.com story, Arkansan Mike Neighbors has done an amazing job of turning around the Washington Huskies women’s basketball program. Under his leadership,  guard Kelsey Plum is becoming the most prolific scorer in Pac-12 history. Regularly scoring 25 or more points a game, the junior is on pace to surpass Stanford’s Chiney Ogwumike to become the conference’s all-time leading scorer next season.

Long before Neighbors was even born, though, other Arkansans were helping breaking records in the Evergreen State. One of the first was Frank Burgess, who owns the top scoring records in Gonzaga University history and ranks alongside John Stockton as one of only two Bulldogs to ever have his jersey retired. A 6’1″ shooting guard, Burgess paced the nation by averaging 32.4 points per game one season.

Born in 1935, Burgess grew up in Eudora near the Arkansas-Louisiana border. As I wrote in Sporting Life Arkansas, he developed a molten jumper on dirt courts, while not exactly dedicated to the game. “He had no interest in playing. He was more interested in studying,” his childhood friend Nathan Crawford told the Arkansas Democrat-Gazette in 2001.

Still, Burgess honed a sweet enough shot to help Eudora High make the state semifinals and rival Johnnie Greer as the best to come out of the area. Like so many other southeast Arkansas black student-athletes of this era, Burgess attended what’s now UAPB in 1953. The coach who recruited him died the summer before he arrived on campus, though, and the successor, Leroy Moore, arrived from Oklahoma with a lot of Oklahoma players, Burgess said in BraveHearts: The Against-All-Odds Rise of Gonzaga Basketball. ”I got the feeling he thought nobody could play ball but folks from Oklahoma. It seemed like he was playing favorites.”

Widespread racism caused Burgess to refer to his hometown as “that little hole I came out of.”

After a season, Burgess ended up following his brother into the U.S. Air Force, where he spent 31 months and developed his groove as a great shooter playing for an Air Force league team in Germany. Colleges such as Kansas and USC started looking at him, but he was sold on Gonzaga when a coach there stressed academics as well as athletics would be an important part of his life at the small, liberal arts school in Spokane, Washington. Plus, it appealed to the 23-year-old that he would not have to sit out a year because Gonzaga was independent. He would have lost a year by going to a conference-affiliated program.

While playing for Gonzaga in 1960, Burgess had one of this finest games against another prolific Arkansan shooting guard — Eddie Miles.

The 6’4″ Miles averaged 23.1 points over three seasons to become the third-leading scorer in Seattle University history. “The Man with the Golden Arm” is considered by many as the best pure shooter to ever play college ball in Seattle. He was drafted No. 4 in the 1963 NBA Draft and to this day a plaque in his honor hangs at Little Rock’s Dunbar Community Center, where often played pickup ball in his youth.

A star at North Little Rock’s Scipio Jones High School, Miles had been on the cusp of becoming the first black Razorback. I spoke to him about this a few years ago:

Miles grew up a Razorbacks fan, like almost everybody around him. He faithfully listened to Hogs football and basketball games on the radio, and especially liked Bruce Fullerton, a highly decorated prep fullback at Little Rock Central who graduated in 1958 before briefly playing for the Hogs.

“I was a Bruce Fullerton fan,” Miles said. “I never thought about I was black and he was white.

And so, as a teen, it didn’t matter to him that the UA’s football and basketball teams continued to be all-white while Northern programs regularly fielded integrated teams.

“You really don’t notice that kind of stuff going on… You never said ‘Well, we’re [seen as] second-class citizens or whatever, and I’m not gonna pull for them.’ You just didn’t think about that. And I think athletics has done more to bring races together than anything else.”

In the late 1950s, Arkansas head basketball coach Glen Rose was eager to reestablish the Hogs as a Southwest Conference power, and he knew Miles could help him do it. But no official athletic scholarship was offered.

Instead, Rose told Miles’ high school coach, A.B. Calvin, that Miles – who had more than 50 offers from various programs – would initially receive an academic scholarship and be a walk-on.

Once Miles made the team, as he almost certainly would have, Rose said he’d get an athletic scholarship.

“But Coach Calvin said ‘No,’” Miles recalled. “Because there were teams like Mississippi and Louisiana and other sorts of schools who had laws on the books that their team wasn’t supposed to play against other integrated teams so he said in a lot of games I wouldn’t be able to play.

See more of this story in Sporting Life Arkansas.