13 Aug 1958 — Original caption: “Sweetwater” Clifton (left) and “Goose” Tatum demonstrate their versatility as they each hold four balls in one hand while jointly holding a basketball with the other at a press conference on August 13. The two basketball stars announced that they will lead the Detroit Clowns against the Kansas City Monarchs in a Negro American League double-header at the Yankee Stadium August 17. — Image by © Bettmann/CORBIS 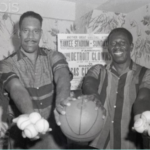