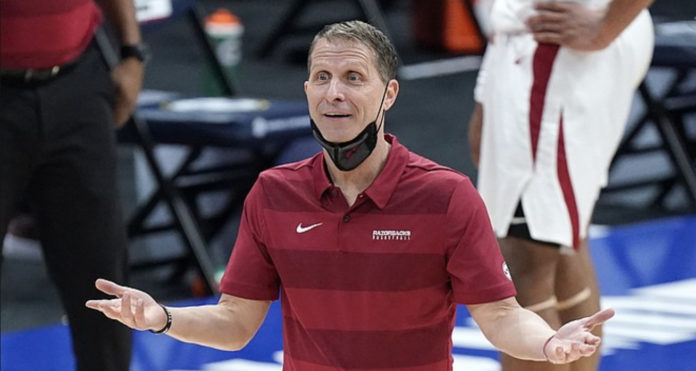 Far too many people around the nation confuse Arizona with Arkansas when it comes to postal codes.

Over and over, “AR” is taken to mean “Arizona” when it really stands for “Arkansas.” Since both states begin with “Ar,” however, the mix up is understandable.

Far less understandable is why there’s so much confusion about the states’ premier college basketball programs as the Wildcats try to land their next head basketball coach in the wake of Sean Miller’s firing.

As candidates are discussed in the national media, there’s a perception that Arizona basketball is a tier above Arkansas’ program — and that this could theoretically help the program coach a great coach like Arkansas’ Eric Musselman.

“It’s a big state school. It’s easy to recruit to the whole West coast. Kids grew up on the West coast wanting to play at Arizona. Most importantly, I think you have a passionate fan base.”

Torres then goes to describe how to well Arizona basketball fans travel, how they turn the annual Pac-12 Tournament into the “Arizona’ Invitational” and pack neutral courts in the NCAA Tournament on behalf of their team.

Yes, Arizona was a better program than Arkansas from 1997 to 2015, but on the whole the programs are on par with each other — Arizona has Four Final appearances while Arkansas has six Final Four appearances. Both programs also boast a single national title and one national runner-up finish.

But Arkansas, crucially, is on the upswing in the last couple years, especially after coming off an Elite Eight appearance in 2021.

Arizona, meanwhile, hasn’t won an NCAA Tournament game since 2017 and is still mired in a tarpit of ongoing NCAA issues flowing from an FBI probe into college basketball corruption.

Yet the ways in which Arkansas program is equal to or superior to Arizona’s is lost on those beating the drum most loudly for the Wildcats to hire Musselman as their next head coach.

Below is an example of one such pundit, by way of NevadaSports.com (Musselman coached at Nevada, where one of his players was Jordan Brown):

Eric Musselman and Jordan Brown reunited in Arizona? Muss' Arkansas buyout drops from $5M to $1.5M on May 1, and Arizona is one of the handful of jobs definitely better than Arkansas. https://t.co/bi1MDsjAJL

Chris Murray’s confusion here about how much more attractive Arizona is than Arkansas may pale in comparison to that of the Jon Wilner, a columnist for The Mercury News out of San Jose, California.

Wilner decided that Musselman needed to return to the West, where he spent some of his youth, so he penned a head-scratcher with this headline:

And that Musselman is “a shrewd evaluator of talent, a proven developer of personnel and a first-class tactician. In six seasons as a college head coach, he has averaged 26 wins per year:”

Wilner’s argument is similar to that of the Hoosiers and Longhorns fans who wanted to see Musselman gets poached by Indiana or Texas: Simply pay Musselman more.

Problem is, that’s not going to be easy.

Even if pure, hard cash was Musselman’s sole deciding factor when it came to Arizona basketball, the Wildcats aren’t in a position to throw extra millions around.

They just fired Kevin Sumlin in football. Sumlin had a buyout of $7.29 million.

Sean Miller, meanwhile, is due a buyout of just under $1.5 million without the responsibility to offset that cost through future employment.

And it’s doubtful that Arkansas athletic director Hunter Yurachek is going to try to lowball Musselman in the contract raise and extension talks they are currently having.

Another argument by the pie-in-the-skiers is that Musselman would feel more at home in charge of Arizona basketball.

Yes, Musselman has some Arizona connections beyond the fact he coached at Arizona State as an assistant.

He admires Golden State head coach Steve Kerr, the former Arizona Wildcat, and has even blogged about Kerr. He’s also friends with Arizona baseball coach Jay Johnson, who coached at Nevada at the start of Musselman’s time there.

But random connections and going to the highest bidder are not what Musselman says matter most to him when it comes to what he wants out of his coaching career.

Is Eric Musselman a viable candidate for Arizona basketball?

“I want to win a national championship,” Musselman said on the Hog Pod with Bo Mattingly.

He added that he considers Arkansa athletic director Hunter Yuracheck as “the best AD in the country” because of Yurachek’s ability to communicate and openness.

Musselman added that his sons had made him aware of reports tying him to previous job openings.

“And then my wife’s like, ‘We’re not living in that city. We like where we are.’ There’s so much false information out there.”

Perhaps the best proof that Musselman intends to stay at Arkansas is that he’s already gone to work building a powerhouse team for 2021-2022.

Last week he hit the transfer portal to find new transfers who can pick the slack with the departures of Justin Smith and Jalen Tate, who if they don’t make it in the NBA could play in some of the top European or Chinese leagues listed in basketball best odds.

“Toney averaged 14.4 points and 5.9 rebounds for the Panthers this season. Lykes missed all but two games this season with an injury, but the 5-foot-7 guard is a great scorer and improving distributor who has shown the ability to control the action against high-level opponents despite his short stature.”

The addition of these transfers should propel Arkansas basketball up the preseason polls if ESPN college basketball insider Jeff Borzello’s Tweet is any indication:

“I had Arkansas No. 12 entering the offseason — and that was before the additions of Chris Lykes and Stanley Umude. Think the Razorbacks can get in the mix for a preseason top-five spot now.”

Musselman is already scheming for how these talented newcomers will return Arkansas basketball to the Elite Eight and beyond in 2022.

“There’s a lot of work that goes into that way prior to the season,” he told Mattingly.

“And then it’s a lot of work by the players on the floor. I mean, who’s in here lifting after we’re done playing and who’s trying to gain a little bit of weight? Who’s working on their three ball a little bit more?”

“All those things become such vital factors as you look into the future.”

That sounds like a near-term future that will be spent with Arkansas and not a program like Arizona which could be facing more postseason bans beyond the one it already imposed on itself.

This isn’t to say Musselman will stay at Arkansas for the longest of hauls, even if he signs a new a contract with a buyout in the $10 million plus range.

Things change, after all. Other opportunities arise.

That’s what happened to the Musselmans at Nevada, where they expected to stay for longer than four years.

“We were happy there and it was a great job and a really good AD,” Musselman said. “And I didn’t know Arkansas and all of a sudden it calls [thanks to Connor Noland’s dad] and it made sense and we’re here and we love it.”

In the end, Arizona isn’t the Pac-12 team Arkansas fans should be worried about.

UCLA, on the other hand, would be more of a serious threat. That’s the team that Musselman grew up cheering for after moving to San Diego as an older child.

Given how well that program is rolling right now under Mick Cronin, whose contract was just extended through 2027, Hog fans shouldn’t worry about the UCLA job re-opening any time soon.

Who will be the next Arizona basketball coach?

Early on, it looks like the frontrunners are Gonzaga assistant Tommy Lloyd and former Arizona Wildcats Damon Stoudamire and Miles Simon. The Stadium’s Jeff Goodman reported Stoudamire (now head coach at Pacific) and Simon (an assistant with the Los Angeles Lakers) were both interviewed in the last few days.

A lot of Arizona basketball fans would like to see the 46-year-old Lloyd get the call up after helping Zags head coach Mark Few turn Gonzaga into a juggernaut.

Currently, Lloyd is the head coach in waiting at Gonzaga, but the Few is only 58 years. That’s potentially another 10+ years of waiting.

The financial incentive to leave would likely be very strong.

“No matter how loyal Tommy Lloyd is to Few and the Zags, a chance to be the head coach at Arizona, with an entry salary somewhere near $2.5 million, is the chance of a lifetime,” Hansen writes.

“How could he resist? It’s not like the Lloyds are forever locked into Eastern Washington. His son, Liam, is a freshman basketball player at Grand Canyon University.”

Still, Lloyd isn’t guaranteed to succeed — or even tread water — if he leaves.

Recent instances of longtime assistants under other elite head coaches show that.

“Johnny Dawkins, the lead assistant to Duke’s Mike Krzyzewski for a decade, went 66-78 in conference games at Stanford, playing in just one NCAA tournament.”

Below, Aaron Torres breaks down a few candidates after mentioning Musselman is an unrealistic possibility:

Why Arizona Basketball Is Attractive (but not more than Arkansas)

Bruce Pascoe, an Arizona basketball insider, recently explained that the program “is not very attractive because it has the NCAA hanging over it.”

Plus, there is “not a lot to inherit unless they can really recruit some of these key international players. But in the long-term if you’re given a deal for five to seven years and there’s a lot of commitment, I’d say it’s probably still an eight” out of 10 in terms of desirability.

“There’s not too many places where you have the kind of support and interest. Because it’s a pretty big metro area here. And of course the closest pro teams are up there in Phoenix.”

“So it’s still the biggest game in town and players like to be that in that environment. And they like to be rockstars walking around to whatever restaurants or whatever. And there’s not too many colleges that really have it. Even a place like UCLA, I don’t think the guys there as much the big stars in their community as the players here are at U of A.”

If players are seeking to be the main show in town, it’s hard to do better than the University of Arkansas. In Arkansas, where there is no major pro team, the state’s entire spotlight shines on the Razorbacks.

Lest we forget, Arkansas owned Stoudamire’s Arizona squad in the 1994 Final Four: