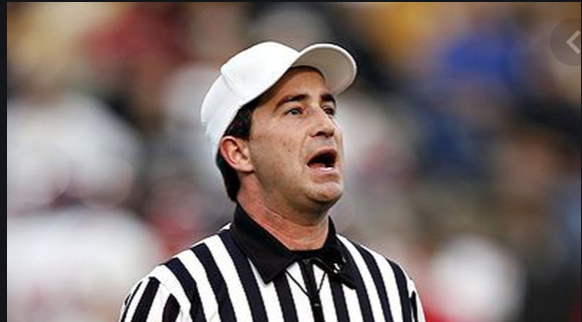 After the LSU game, it’s easy to see why Marc Curles is persona non grata in these parts.

He is, after all, the referee at the center of the bungled Jalen Calalon call at the end of the game that left the Razorbacks’ star safety ejected not only for the remainder of that game, but also for the first half of the next game.

It was so bad it had former Hogs quarterback Clint Stoerner equating it with equine manure:

Kid was ejected & suspended for this. The fact that the ejection/suspension aspect of this call isn’t discretionary is horse shit. The SEC/NCAA doubling down, not overturning the suspension after a postgame review, is worse.

It’s easy to turn Curles into Public Enemy No. 1 here.

For one, Arkansas was already hosed by SEC referees earlier this season when what should have been a critical lost fumble by Auburn’s Bo Nix was magically transmogrified into a win for the Tigers.

Marc Curles called that game as if he were protecting the home SEC team against a non-conference opponent, maybe forgetting Arkansas also was in the SEC. National commentators were quick to blast the SEC at the time for seemingly doing everything in its power to assure that an unbeaten Florida and Alabama would meet in the SEC Championship Game.

Arkansas jumped out to a 20-13 lead in that one but got no benefit of the doubt when things went nuts in the final 7 minutes. That stretch included:

Anyone else remember this game in 2009? Curles and his crew were suspended after that disaster.

Look, I know referees have a difficult job, but how can Marc Curles still be officiating Arkansas football games? @SECOfficiating @davidpollack47 pic.twitter.com/hzc2fYOBWm

Danielson and his CBS announcing partner Verne Lundquist openly criticized those dubious calls that allowed Florida to stay unbeaten, rallying to win 23-20 on a late field goal. The SEC had to acknowledge that the officiating was atrocious, if not suspicious, and suspended Curles and his crew for THREE weeks after that.

Former Hogs coach Bobby Petrino, then in his second season at the helm, insisted Curles never referee a Hogs game again while he was there. But Curles was back on the field with the Razorbacks to open the Bret Bielema era when Arkansas hosted Louisiana in 2013.

This time around, I recall Curles calling the game in a way that favored the SEC team over the non-conference team. At the end of the game, he and his team made calls against Louisiana like a late hit on the sideline that kept an important Arkansas drive late in the game going. I also remember one of those mystery drive-hurting holds against what used to be known as the Ragin’ Cajuns. Arkansas ended up pulling away for a 34-14 win, but I came away from that game feeling like Curles knew who was signing his check.

Back in the day of the Southwestern Conference, when Arkansas usually beat Tulsa, Tulsa fans would often gnash their teeth over what they felt were SWC refs making sure Arkansas seemed to get more of the breaks. These are things Arkansas fans probably wouldn’t have noticed while Tulsa fans screamed about them.

In 1971, when Drew Pearson helped lead Tulsa from 20-0 down in the fourth quarter to upset the Joe Ferguson-led Hogs 21-20, the earth over in Tulsa actually shifted from shock.

So, does Marc Curles have a built-in bias toward Arkansas against the longtime SEC powers?

If he doesn’t, is it possible he comes in with preconceived notions about certain players? Curles had already ejected Catalon in a previous game against Texas A&M for what was much more clearly a targeting penalty.

Perhaps, Curles and crew knew they would be watching Catalon more closely because of this track record and because Catalon’s hard-hitting style reminiscent of Steve Atwater and Ken Hamlin had been featured in several stories in the preceding week.

In that context, perhaps Curles was never going to see the video review of Catalon’s hit on LSU’s Kayshon Boutte any differently than a dangerous shoulder hit to the head-and-neck area, even if that review also showed Catalon did everything he could to avoid the textbook definition of “targeting” on the hit.

That wasn’t the only egregious call, of course.

On Arkansas’ last drive, Hogs running back Trelon Smith was called for a tripping penalty. I’m not sure if Curles or a head linesman threw it, but it spurred a head scratch regardless.

Smith was thrown sprawling. Yes, the LSU defender did trip, per se, in scrambling over Smith to pursue Franks, but tripping is supposed to be intentional tripping. It shouldn’t entail trippring over a sprawling player. There is no way you can watch the replay and say that Smith stuck his legs out intentionally.

That was a 15-yard penalty, the kind that often kills drives. It sure did here. The refs should not have it. I know of two tripping penalties called in college football in six years and both were against Arkansas. The most critical one was the one on Dan Skipper against Texas A&M which wiped out a 58-yard run by Jonathan Williams that would have iced that game, with Hogs already up by 14 in the fourth quarter. Instead, Hogs would lose in OT.

At the end of the LSU game, Curles and his crew also blew a Tigers’ touchdown reception, ruling it incomplete when it appeared the receiver clearly had maintained possession through the catch past the goal line pylon. That reversal didn’t hurt LSU as the Tigers still scored on that drive to take the lead for good.

Still, the misstep plus Curles’ history of helping SEC teams against non-conference opponents points to this being a case of incompetence instead of corruption. Against Arkansas, Curles didn’t protect LSU. He’s just bad.

And, unfortunately, his bad hurt Arkansas worse than LSU. Even at home.

Processing…
Success! You're on the list.
Whoops! There was an error and we couldn't process your subscription. Please reload the page and try again.
Facebook Comments