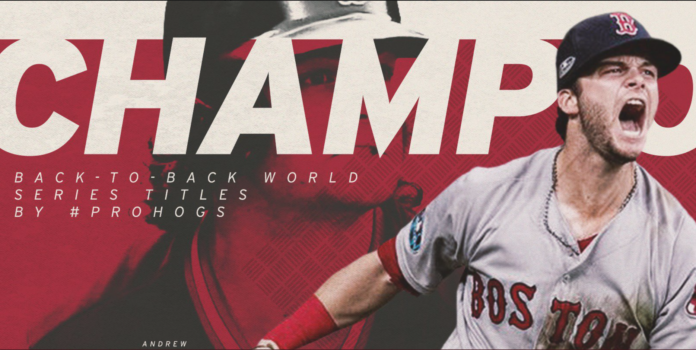 Andrew Benintendi played all five games of the series, batting .333 with one double, one RBI and one walk. In Game One, he essentially destroyed three-time Cy Young Award winner Clayton Kershaw. He went 4-for-5 and was only the second lefty to ever have three or more hits in a game against Clayton Kershaw. In the 2018 postseason combined, Benintendi hit .272 with five doubles, two home runs and nine RBIs.

For the season on the whole, Andrew Benintendi finished with a .290 average, a .465 slugging percentage and a .366 on-base percentage. These stats are all at least 15 points higher than in 2017 when he finished second in American League Rookie of the Year voting.

[Read more about Benintendi’s Razorback background in my latest piece for OnlyInArk.com]

Below is a list of other former Razorbacks to play under the brightest lights in the game:

Last year Dallas Keuchel helped lead the Houston Astros to a win over the Dodgers, too. Though he didn’t played in the seventh and final game, he made two appearances in the World Series. He pitched 10.1 innings and gave up six earned runs with seven strikeouts. He started games one and five against the same Clayton Kershaw Benintendi would partially destroy a year later.

Dallas Keuchel’s year, his sixth in the pros, was a bounce back. After winning just nine games and compiling a 4.55 ERA in 2016, he went 14-5 with a 2.90 ERA and 125 strikeouts in the regular season. His ERA was the best among Astros starting pitchers.

The Benton, AR native made it all look so easy.

In the 2009 World Series, Cliff Lee won both of his starts for the Philadelphia Phillies against the New York Yankees. In Game 1, a 6-1 win, he pitched a complete game and allowed no earned runs. He was the first pitcher since Deacon Phillippe of the 1903 World Series to pitch a complete game in the World Series with ten or more strikeouts and no walks. Cliff Lee was the first major leaguer to pitch such a game without allowing an earned run.  Lee earned another victory in Game 5, allowing five runs and three walks while striking out three in seven innings.

He also displayed some uber-nifty fielding:

The next year Cliff Lee returned to the World Series, this time pitching for the Texas Rangers against the San Francisco Giants. We will not speak of this disaster.

Congratulations to Andrew Benintendi as he becomes the fourth Razorback to win a World Series title!! #DoDamage pic.twitter.com/AoyZroB2L4

At least 10 former Razorbacks have played in the World Series. Did I miss anybody? Leave a comment below or hit me up at evin@bestofarkansassports.com.