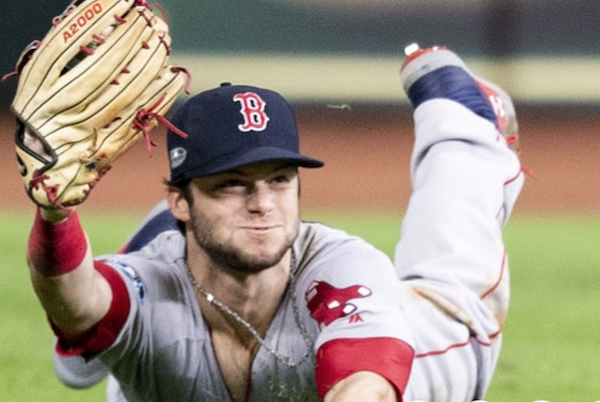 Andrew Benintendi has had quite the year.

The outfielder watched his beloved Razorbacks go deep into the College World Series, then helped his own Boston Red Sox win the World Series.

In between, he made the play of the year.

Andrew Benintendi was recently honored with the Associated Press Play of the Year across all sports. Benintendi made his jaw-dropping catch in the bottom of the ninth, with the bases loaded, in the American League Championship Series against Houston.

The snag sealed the win and gave Boston a commanding 3-1 series lead.

Andrew Benintendi may never make a better catch. The left fielder for the Boston Red Sox made a diving grab to end Game 4 of the AL Championship Series, a huge play on his team’s run to the World Series title. Boston led 8-6 in Game 4, up 2-1 in the series, but the bases were loaded in Houston and the crowd at Minute Maid Park was roaring. Alex Bregman hit a liner that was sinking fast, and if it had gotten past Benintendi the Astros would have likely scored three runs to win. But Benintendi dove perfectly, snared the ball just above the grass and the rest is now Red Sox lore…

Benintendi won the award over spectacular plays by the likes of LeBron James, Lionel Messi and Tua Tugovaiola. The runner-up was Notre Dame’s Arike Ogunbowale, perhaps the most ice-blooded performer in March Madness history. She knocked off UConn in the semifinals with a last-second jumper, then tore out the heart of former Arkansas assistant coach Vic Schaefer with a buzz-beating three pointer in the finals against Mississippi State.

For more insight into Andrew Benintendi’s special postseason and Razorback ties, make sure to read my OnlyInArk feature.