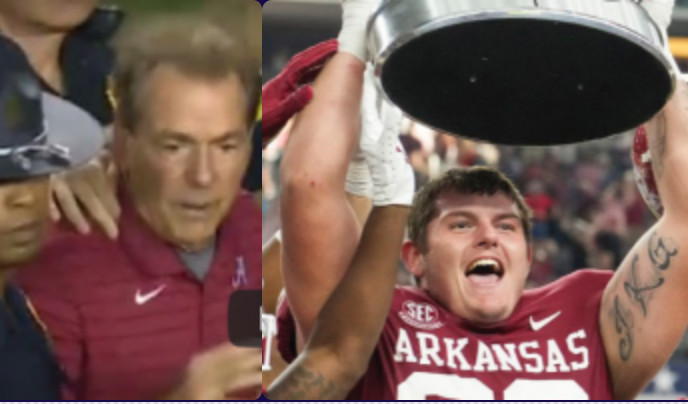 This season, the Razorbacks have been involved in some pretty crazy-sounding theories coming from the fevered minds of other teams’ fans.

First, there was a Texas fan who came up with an elaborate theory that Texas head coach Steve Sarkisian purposely had his team get destroyed by Arkansas in Week 2 in order to teach a lesson that would prepare them for the team they really cared about — Oklahoma.

As ridiculous as this sounds, for a while it didn’t seem incredibly off as Texas ran roughshod over its next three opponents in Rice, Texas Tech and TCU.

But then, in the big OU game on Saturday, the Longhorns do what they do so well: lost the big one.

Another theory involving the Razorbacks that sounded preposterous at first glance came from a Texas A&M fan who theorized that Aggies head coach Jimbo Fisher allowed his team to lose its Week 4 and Week 5 games against Arkansas and Mississippi State to catch Alabama unaware on Saturday night.

Arkansas media and fans had a field day with this:

The above Tweet is only the first part of conspiracy theorist Duke Silver’s notion. It continues:

“He [Jimbo Fisher] then unleashes his offense with the best game plan he’s ever drawn up… in the works since his $1.5 million raise.”

“[Aggies] beat Bama, rest of SEC eats its own, Auburn beats Bama and [Aggies] beat UGA in the SEC Championship for our first CFP birth of many to come.”

Most Arkansas football fans filleted this on social media:

“Proof of how bad the education and healthcare systems in this country,” Arkansas football fan Chris McWilliams wrote on the Hogville Facebook page. “Poor Aggie is lacking in critical thinking skills and desperately in need of mental healthcare professionals.”

“And they say Hog fans are delusional,” Aaron Ahrens said.

“That dream I have involving Scarlett Johanson, Mila Kunis, and a flamethrowing ninja is more likely to come true than this,” James Parks added.

Scott Telford then came off the top rope with this: “Haven’t read a good Aggie joke in a while. Gracias.”

On Saturday night, as Texas A&M built a 14-point lead on Alabama in the first half, one fan asked Pig Trail Nation’s Mike Irwin if Duke Silver’s hypothesis might have legs after all.

Irwin wasn’t having any of it:

For a good part of the second half, it looked like Alabama would storm back and take the game as it so often does.

Texas A&M had only run 10 plays with 8:48 left in the game as the Crimson Tide defense bowed up. But in the last few minutes of the game, it was Texas A&M, not Alabama, who came up with the clutch plays on the way to a stunning 41-38 win.

It was Alabama’s first loss to an unranked opponent since 2007 and the first time that Nick Saban had ever lost to a former assistant in 25 career games.

Not just the defense, as is expected in such a shootout, but the offense too. Talty wrote that new Alabama offensive coordinator Bill O’Brien, who replaced Steve Sarkisian in the offseason, has underwhelmed despite coming in with impressive NFL bonafides.

“Two of Alabama’s Heisman winners, Smith and Mark Ingram, voiced their displeasure when Alabama had the ball on Texas A&M’s 3-yard line and threw the ball three consecutive times before settling for a field goal.”

“Running back Brian Robinson had been running hard all night, one of the few bright spots on a sloppy offensive night, and yet O’Brien wouldn’t trust him even once to get three yards for a touchdown? Shaky coaching decisions like that weren’t the sole reason Alabama lost, but they certainly played a role.”

The Aggies team that the Razorbacks owned just two weeks ago in a 20-10 win was not the same one that stepped onto the field with Alabama on Saturday night.

Against the Razorbacks’ defense, Aggies sophomore quarterback Zach Calzada, still fresh off taking the starting job from the injured Haynes King, was stymied and flummoxed game. He threw for only 156 yards and made a critical fourth-quarter interception.

Against Alabama, aside from a bone-headed interception, Calzada looked like the SEC’s third-best quarterback after only Matt Corral and KJ Jefferson. He completed Calzada completed 21 of 31 passes (and 14 of his first 15 attempts) for 285 yards with three touchdowns.

In the same way that KJ Jefferson came back from an injury to help Arkansas finish off Texas A&M, so did Calzada come back from a knee injury to lead the game-winning drive for the Aggies.

Few folks, after all, felt like this Aggies team was the one to break Alabama’s 100-game winning streak vs unranked opponents:

The Aggies going undefeated from here on out, and Alabama losing to anybody else the rest of the regular season, are both tall tasks. But stranger things have happened.

As for the Razorbacks, the fact they beat a team that knocked off a juggernaut is going to help them in the polls down the road despite a nail-biter of a loss on Saturday to Ole Miss.

If the Razorbacks can return to their winning ways next week at home vs Auburn, and win four or five more games this season (for a total of eight or nine wins), then the boost they would get from beating a surging Texas A&M team could make the difference in the quality of bowl invite they get.

For Arkansas, it may even make the difference in getting an invite to a New Year’s Six bowl or not. While it’s possible that Alabama’s loss may open the door to Cincinnati getting into the College Football Playoffs and could cost Arkansas a New Year’s Six bowl, (currently CBS predicts Alabama to play in the Sugar Bowl), Arkansas is still in the running for a bowl played on New Year’s Day.

CBS current has Arkansas playing Nebraska in the Outback Bowl on January 1, 2022.

On Sunday, the Razorbacks came in at No. 17 in the AP poll and No. 19 in the USA Today Coaches Poll.