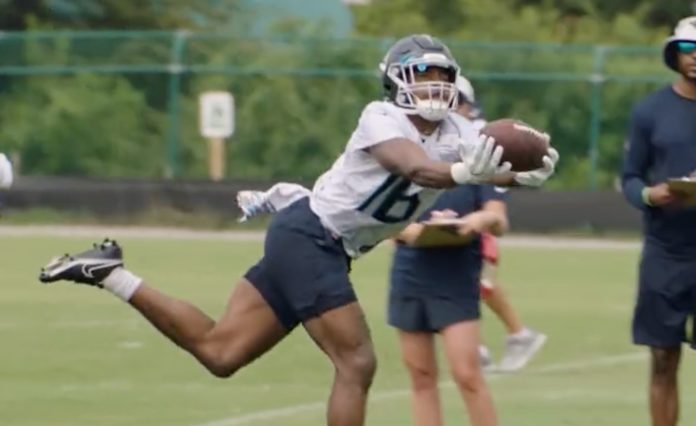 Look, we get it. Treylon Burks’ first little bit here in Fayetteville, Arkansas, wasn’t quite what we expected, either. But be patient. The man is one heck of a football player.

If you’re a regular around here at Best of Arkansas Sports, you know that some folks over in central Tennessee and surrounding areas of Titans fandom have been, well, less than thrilled about Burks’ first several weeks on the roster. One Tennessee Titans writer in particular dragged not just Burks but Arkansas coach Sam Pittman, suggesting that the Titans front office should never deal with him again.

Which is, of course, ludicrous.

Slow Start With the Razorbacks

Burks has been gifted with raw talent, but even during his first year at Arkansas, that didn’t always shine through. He had a team-high 475 yards receiving and his 29 catches were only four shy of the team lead. But with zero touchdowns, it didn’t seem exactly predestined that his career with the Razorbacks would ultimately go the way it did.

Of course, last year, his junior season at Arkansas, resulted in 66 grabs for 1,106 yards and 11 touchdowns. It was the best single season of receiving the Hogs have had since Jarius Wright had 66 catches for 1,116 yards and 12 scores back in 2011.

Point being: it took Burks some time. Pittman said as much during these most recent SEC Media Days when he was asked about his former star.

“It was the same thing when he was a sophomore,” Pittman said. “He wasn’t in great shape. He couldn’t last through practice. It’s not that he quit, he just couldn’t do it anymore. He was out of shape.”

See, Burks had played that first season under Chad Morris. Little to nothing went right in the two years of that regime. Sure, potential was there. Hope abounded that he, Trey Knox and Mike Woods could create a Wright-Joe Adams-Greg Childs-like trio in the future. Woods left for Oklahoma and Knox left for the doghouse (from which he has now exited). But that set of wideouts were being thrown passes from Ben Hicks, Nick Starkel, John Stephen Jones and Jack Lindsey. Oh, and for good measure, KJ Jefferson entered three games. Five different quarterbacks didn’t exactly allow for consistency and the Razorbacks hobbled to a 2-10 record.

But Pittman’s arrival motivated Burks to work harder, the same way that being dragged about his conditioning during mini camp probably did this year for the Warren native.

Burks Bounces Back in 1st Real Practice With Titans

So on Wednesday, in his first real practice in a Titans uniform, Burks showed why he was a first-round pick, going through full drills and the full session, catching three balls, including a deep one thrown by quarterback Ryan Tannehill that brought back memories of the catches he made with the Razorbacks.

It isn’t just the deep ball that the Titans are hoping Burks can add to the mix. After making that grab above, he caught one over the middle, too, showing he can be a complete wideout at the next level. In all, most of the Tennessee Titans media praised the rookie’s first-ever professional practice.

“Honestly, I just (need to) keep conditioning where I don’t feel it no more, making sure I am taking my inhaler before practice, after practice, just staying on top of everything,” Burks said after practice Wednesday.

He told Titans reporters he had lost five or six pounds since camp and was working even more to get himself into NFL-playing shape.

“I feel a lot different and I feel a lot healthier,” he said. “It just makes me feel good that I can come out here and play a role and be a part of this team.”

A Tennessee Titans Job for the Taking

Much of the criticism was ill-founded. Burks was dealing with asthma issues that kept him limited during mini-camp. Little was known about his medical condition during his time at Arkansas. The Razorbacks athletics department, even before the Pittman era, have been notoriously taciturn when it comes to players’ health. That isn’t necessarily a bad thing as it protects players, but it can be frustrating for fans and media members who often want to know the “why” someone is struggling or absent.

Likely, though, the fault-finding about Burks’ conditioning is rooted in fear. The Tennessee Titans lost last year’s leading receiver, AJ Brown, to the Philadelphia Eagles in the offseason. And, in fact, the only player returning in the wide receiver unit who had any impact with the team last year is Nick Westbrook-Ikhine, whose 38 catches for 476 yards and four scores make him by far the most experienced player at the position.

As for the quarterback situation, Tannehill is the passer Burks will have caught balls from in the last four years. No, the former Texas A&M wideout-turned-quarterback isn’t a star, but he’s been a constant starter in the NFL since the 2012 season and quarterback power rankings have him tabbed as the No. 12 signal-caller in the league.

That is to say, a job is there for the taking for Treylon Burks. Now, just like in his sophomore season, he looks ready to go grab it.