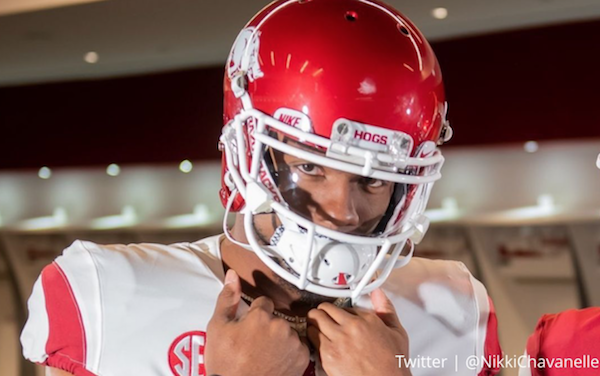 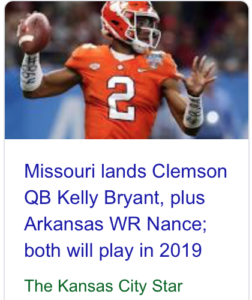 The Kelly Bryant transfer sweepstakes continue. The highly sought quarterback recently visited Missouri a week after visiting Arkansas. At Arkansas, Kelly Bryant hog called up a storm, hammed it up with fans and wore a Razorback hat.

At Missouri, yes, Bryant put in his obligatory mascot hug:

But, overall, nothing like the dynamic that played out in Fayetteville played out in Columbia. (FYI: Kelly Bryant to Missouri is not confirmed.) Razorback fans should feel confident Missouri won’t be Bryant’s final destination for at least five reasons:

Like in Arkansas, Missouri fans showered Kelly Bryant with good vibes, calling out his name. Unlike at Arkansas, said fans accidentally showered someone else, too:

I mean … at least Arkansas fans KNEW who Kelly Bryant was ? https://t.co/cSGKerzjQ9

When not hanging out on the sideline, apparently looking all Bryant-like, perhaps the above Mizzou staffer could have gotten Bryant a hat. Then again, it’s possible Bryant didn’t even ask for one. Either way, not wearing a hat is a sign of a “meh” attitude toward the Tigers.

LITTLE LOVE FOR THE LOCAL MEDIA OR FANS

Earlier in the week, Kelly Bryant sat down with ESPN’s Maria Taylor for an 18-minute interview about why he’s transferring from Clemson and what he’s looking for in his next school:

Before his Arkansas trip, he also phoned in for an interview with Arkansas sports talk host Bo Mattingly. In that interview, he laid out specific reasons why he’s so close to former Clemson coaches Chad Morris and Joe Craddock. He talked up Fayetteville and the fans. You could hear the passion in his voice.

Naturally, some Missouri Tiger media members would have tried to their own interviews with  Kelly. It appears none of them were successful. I haven’t seen a single exclusive with Missouri sports media surface.

That’s bad news for Mizzou fans. The modern star athlete understands how important it is to connect to fan bases and build a “brand” and following. If he doesn’t even deem it worth his time to talk to those fans through local media, he almost certainly won’t want to spend a year training and playing for them.

LOOK HOW WEE THIS CROWD IS

According to reports, Bryant hung out with Mizzou women’s basketball players on the sideline and chatted it up with receiver Emanuel Hall. Mizzou fans better hope he didn’t glance up and look at the crowd around him. For a top 15 showdown against Kentucky, barely more than 50,000 folks showed up.

It was so bad that even the Missouri student newspaper’s sport editor, threw some shade. “#Mizzou’s perpetually lethargic crowd (even when large-ish) can’t be all that appealing to Kelly Bryant,” Bennett Durando tweeted.

Kelly Bryant has said he has a “real strong” relationship with Hogs coach Chad Morris, who successfully recruited him to Clemson.

Bryant doesn’t have the same kind of warmth and familiarity with Missouri head coach Barry Odom and offensive coordinator Derek Dooley. It shows in the below pre-game pictures, where Bryant looks like he’s discussing his latest water bill with a utility company rep:

It didn’t help Missouri’s chances that these coaches then proceeded to lead the Tigers into the Seventh Circle of Offensive Hell. In losing to Kentucky, the Tigers didn’t pick up a first down in the second half and went seven straight three-and-outs on offense to finish the game.

“It’s not who they’re losing to, it’s how they’re losing,” ESPN+ broadcaster Kevin Gehl tweeted afterward. “[Drew] Lock’s and-one year has been a complete bust. And if Mizzou gets shelled at Florida and loses at home to Vandy, how does [Barry] Odom even finish this season? Kelly Bryant can’t commit to a coach who won’t be there.”

After his visit, Bryant spoke with South Carolina media about his visit. He said all the right, polite things:

“It was definitely a great experience, great time, just really getting up there and just hearing from the coaches’ perspective and seeing for myself firsthand what all they’re about. I really could see myself there. To me, I felt like at the end of the day I look back, they checked all my boxes.”

Bryant will remain polite with all the programs courting him. Hog fans know genuine excitement and passion, which he showed with the fans and media in Fayetteville, speaks for itself.