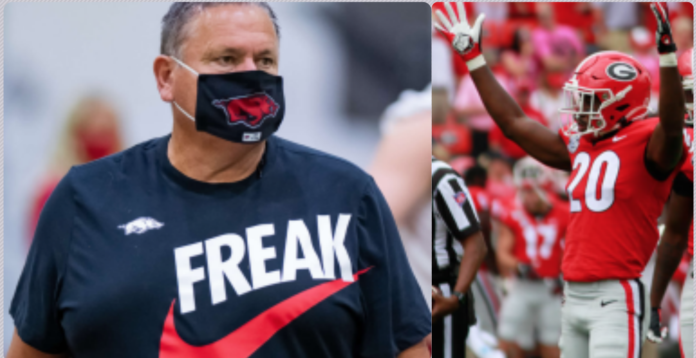 Predictably, most college football experts have pegged the Hogs as the worst team in the SEC.

—Saturday Down South:  1-9 record; last in the West

—National AP Top 25: Not even sniffing it

To add insult to injury, in the “Others Receiving Votes” section of the AP poll, Arkansas State would be #30, Mississippi State #33, Ole Miss #36 and even Missouri comes in at #40.

WHO CAN BLAME THEM?

—A promising but new QB

However, this fall there are a lot of new coaches on the sidelines and new QBs on the field.  Among the Hogs’ 10 opponents, just half of them return starters at QB (Auburn, Ole Miss, Texas A&M, Florida and Tennessee).

Meanwhile, Ole Miss, Mississippi State and Missouri are all breaking in new head coaches. And MSU and Mizzou will take the field with new QBs as well.  Given this, almost anything could happen this season. And things will be especially unpredictable in the Sept. 26 season opener at home vs. Georgia, which plays in the Hogs’ hands.

Now, before you think I’m a couple of fries short of a Happy Meal, just consider these five reasons to believe we can beat the Bulldogs

Last year, Rakeem Boyd ran for over 1,100 yards and Trey Knox, Treylon Burks and Mike Woods combined for roughly 1,500 receiving yards.  These feats were accomplished behind a line that, at best, was average.  This will get better.

Having said that, Georgia returns eight starters from a defense that was in the Top 5 of most categories nationally last year.

Georgia’s veteran defense is better than Arkansas’ improved offense.  We’ll have trouble, like every other team, moving the ball on Georgia.  But, there is a path forward, grasshopper….

Georgia returns only 3 starters on offense.  They’re replacing a QB, 4 offensive linemen, a featured tailback and a receiver.

Now granted, every replacement was probably a 4- or 5-star coming out of high school. They will be long on talent, but short on experience.

The bottom line is this will be their first live action as starters.  We’ll see how they play on the road when the bright lights come on.

Based on the information above, I’d bet the “under.”  Georgia’s defense will provide few opportunities for Arkansas to move the ball consistently, which is what makes the Hogs’ ability to tear off big-yard plays so much bigger.  We have the playmakers to take advantage of their mistakes and it could be the difference.  Any team in the country would take Rakeem Boyd, Treylon Burks, Trey Knox and Mike Woods on their team precisely because each of those dynamos have the ability to score on any given down.

Arkansas has proven playmakers, while Georgia’s are largely unknown outside of George Pickens and Zamir White.

Sure, this almost sounds superstitious, but it’s not.  The Hogs have a history of outperforming preseason expectations when they’re low.  Consider the Hogs have been chosen in the AP’s preseason poll 24 times, but finished in the final Top 25 poll 26 times.

Despite having a president from Arkansas, the largest retailer in the world based in Arkansas, the most rice produced of any state, a great trucking industry and a poultry empire that at one point controlled 70% of the world’s chicken production, we still get no respect.

Hell, the Rolling Stones were pulled over in Arkansas, Johnny Cash is from here, and for God’s sake we can’t leave out Levon Helm who hails from Arkansas.  We’ve even had America’s only sighting of the nearly mythic Ivory-billed woodpecker in modern times.

All, this, and we still get no respect.

Vegas has Georgia barbecuing Arkansas by 24 points, a vast margin that has Razorbacks like Mike Woods champing at the bit to show the world they deserve more respect than that.

5. Bugs in the windshield

For Georgia and its faithful, playing Arkansas qualifies as a “bug in the windshield” game on their Road to the National Championship bus (one they are thankful has nothing to do with anybody named “Gus”).

When a national title is a realistic goal, every game is critical.  Every coach knows it and preaches “if we lose now, our championship run is over.”  But, not all 18 to 22 year-olds have the ability to truly internalize the meaning of that and go 100% on a 24/7 basis.

Rarely does a team achieve a #4 national ranking when returning only three players on one side of the ball.  With that in mind, there’s an argument to say this Georgia team is literally overrated.

But, whether they’re overrated or underrated, the best way for the Hogs to get a win against Georgia is for them to simply overlook us.  And, the fact is, it’s actually a “trap game” for them.  Here are their first four games.

Pop quiz:  Among their first four opponents, who does Georgia fear the least?

Answer:  Any answer besides Arkansas lands you in the “I’m Not the Brightest Bulb on the Tree Hall of Fame.”

The bottom line is that the possibility of catching Georgia sleeping is our best hope to win this game. So, that leaves us with one main question: If Georgia comes to Fayetteville and gives an 85% effort, will our 100% effort be enough?

In years past, I would say “No.” But with a vastly improved coaching staff and new quarterback in Feleipe Franks, that’s no longer the case. Even before our first game, it’s clear we’re on the cusp of being competitive in the  SEC.

When was the last time that the Hogs’ 100% bested Georgia’s? Relive good’ times in the Hogs’ last minute 31-24 win over Georgia here: